A Few Items of Political Note

Here are a few political items from across the state this afternoon.

Today, the Indiana Commission to Combat Drug Abuse launched an interactive, online Naloxone Administration Heat Map, providing insight into the location of incidents where naloxone was administered and reported by emergency medical services (EMS) providers throughout the state.  Also known by the brand name Narcan®, naloxone blocks the effects of an opioid overdose and can save the life of the patient. After they administer naloxone, Indiana EMS providers report to the Indiana Department of Homeland Security (IDHS) the locations of incidents when an overdose situation is presumed.   Developed through a partnership between the Indiana Management Performance Hub and the IDHS, the Naloxone Administration Heat Map displays naloxone administrations reported by EMS since Jan. 1, 2014.

Citizens Action Coalition announces its 2018 Voting Records and Campaign Contribution Database, a unique and interactive database designed to inform Hoosiers of their state legislators’ votes at the Indiana State Legislature regarding consumer, environmental, energy, and utility issues.  The database also highlights legislators’ campaign contributions from the Energy and Natural Resources Sectors as defined by the organization Follow the Money.

Indiana utility regulators approved an agreement between Duke Energy and consumer groups to lower customer electric rates using savings from the new federal tax law. The move will mean a 5.6 percent average rate reduction for Duke Energy Indiana customers by 2020, with most of the savings beginning in 2018.  Additional savings as a result of the federal tax act and the settlement will be reflected in future filings before state utility regulators. The amount of the tax savings will vary by customer class. Average residential customers using 1,000 kilowatt-hours a month will save $7.33 on their monthly electric bills by 2020.  Duke Energy, the Indiana Office of Utility Consumer Counselor, the Indiana Industrial Group and Nucor Steel submitted the agreement to the Indiana Utility Regulatory Commission in late June. The agreement outlined how to pass along to customers the benefits of the Tax Cuts and Jobs Act, which federal lawmakers passed in late 2017.

Congressman Jim Banks (IN-03) yesterday led a group of 50 House colleagues in sending a letter to House and Senate members of the 2018 Farm Bill conference committee urging them to include the Banks amendment to permanently repeal the 2015 Waters of the United States (WOTUS) rule in the final bill.

Today, Lt. Gov. Suzanne Crouch along with the Indiana Office of Community and Rural Affairs announced that more than $10M in federal grant funding is being awarded to 19 rural communities.

A Few Minutes with Jim Banks 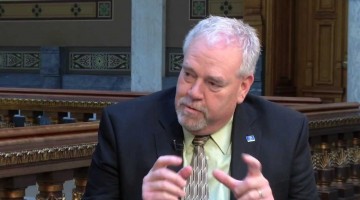