A Few Minutes with Mike

In his end of year interview with Indy Politics, Indiana Governor Mike Pence says he doesn’t look at the issue of whether to add sexual orientation and gender identity to the state’s civil rights code as one of economics, but as whether it is the right thing to do.

Last week the Pence administration announced nearly 700 new jobs in Indiana, most of them being created in counties or municipalities that prohibit discrimination based on sexual orientation and gender identity.

Pence says he is continuing to talk to all sides of the issue and plans to make his thoughts known next session.

Indy Politics also talked to the Governor about jobs, road funding, the state’s growing problem with meth and heroin, as well as the latest controversy surrounding ISTEP.

You can hear the Governor’s full comments in the Leon-Tailored Audio above.  They run approximately 11 minutes. 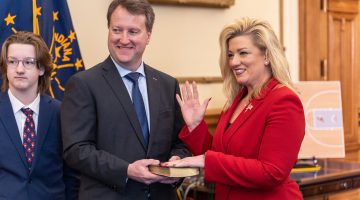