Indianapolis is on track for another year of record murders.

I will let that sink in.

As I write this column, we have had close to 130 murders in the city, or a murder every 1.44 days.  This puts us on track for 254 criminal homicides, far exceeding the 214  murders we saw in 2020.  And even if you exclude the three mass shootings we had this year, Indianapolis is still on track to break last year’s record.

What makes this annoying is that this city has spent millions over the years in crime prevention grant money, and it seems all we get for our results is more crime.  Since 2017, the city of Indianapolis has spent nearly $17 million in crime prevention grant dollars, and at the end of the day, it seems that all we have is more crime each year, particularly with our murder rates.

And the city is getting ready to spend another $3 million on summer crime prevention, but that money won’t be distributed for a few more months, so there’s plenty of time for the body count to get higher.

You have to ask where has all the money gone?  What are these community groups doing with the cash, make that the taxpayer dollars that they’ve received?  I realize this could be asking to prove a negative; after all, how do you demonstrate someone didn’t get shot because of your efforts, but something has to be done, and there needs to be some form of accountability.

And don’t get me started on the “Violence Interrupters,” the city’s answer to the Ten-Point Coalition.  What violence have they interrupted?  I know they took a trip to Oakland to study their anti-crime efforts, which by the way, pretty much boiled down to gentrification.  But the body count in Indianapolis continues to grow.  And did I mention that one of the violence interrupters was recently charged with the Level 6 felony of intimidation?

So what is the city to do to get its murder rate under control?

The  Indianapolis Fraternal Order of Police has put out a shortlist of four things that the city could do today.

I am a big fan of point number four, ceasing low bonds.   The fact that most of the crime victims and suspects have adult felonies is a pretty good indicator that someone isn’t spending enough time behind bars.  If they were, someone would probably still be alive today.

Speaking of which, I didn’t get a chance to mention our non-fatal shootings, which are also through the roof.  And note, had someone had better aim, or Indianapolis not have had a really good medical infrastructure, our murder numbers would be a lot higher.

I get the fact that crime is up nationwide and addressing the issue will take long-term solutions.  But with that said, something needs to be done and done now.   Another year of record criminal homicides is not another record I want to see Indianapolis break. 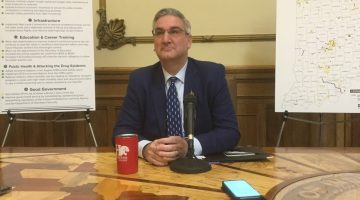