Black Democrats Call on Marion County Chair to Step Down

At a news conference at the Statehouse Tuesday afternoon,  the lawmakers and clergy accused Bell of running an unfair pre-primary convention, saying she should not be running the convention while also being a candidate for office as well as county chair.

They say she has also discouraged African-American and Latinos from running for public office and precinct committeemen.

You can hear the Democrats in the Leon-Tailored Audio above.

It runs for about 17 minutes.

“I have great admiration for the public service of those who expressed concerns today, and I respect their decision to not seek the Marion County Democratic Party’s support at our pre-primary convention.    I am also proud that this weekend, the Democratic Party will endorse a group featuring 50 percent candidates of color — one of the most talented, diverse tickets in county history. This is the continuation of a multi-year strategy to make our organization more reflective of the Democratic Party and our constituents in Marion County, which included the recent election of an executive committee with representatives from the Black, Latino, and LGBT communities. As in 2018, when I was also on the ballot while serving as County Chair, the pre-primary convention will be overseen by our Vice Chair, and I have the utmost faith in both he and our executive committee to run a successful event under the Indiana Democratic Party’s rules.” 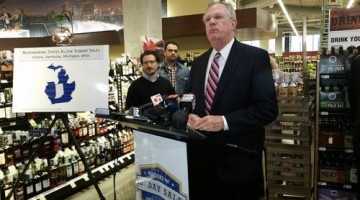