Indiana lawmakers are announcing they have reached a deal on the budget.

The spending plan includes more $763 million in education funding, a 2.5 percent increase in each budget year, $150 million in freed up pension funds and $37.5 million in teacher appreciation grant funding.

The state surplus would also sit at about $2 billion,

Some other non-budget items included in the spending plan

A deal means lawmakers can vote on the budget tomorrow afternoon.

“The state budget proposal represents our strong commitment to funding the state’s priorities while holding the line on spending and maintaining reserves. We responsibly boosted investments in public K-12 education, school safety and proven workforce programs,” Speaker Bosma said. “Republican leaders in the House and Senate along with Gov. Eric Holcomb worked hard to meet the state’s needs and maintain a structurally balanced budget.”

Indiana Democrats were not so pleased.

“Every single item that my Senate Democratic colleagues and I have fought for over the past four months was removed from the budget in the final days of session. In my 14 years in the General Assembly, I have never been so disappointed with and angry at the games played by the Republican supermajority,” State Senator Karen Tailian noted.  “Senate Democrats fought to pass legislation that would improve the lives of Hoosiers and every one of our efforts was eliminated. Those efforts included protecting the Lake Michigan shoreline from erosion, providing adoption subsidies for foster parents to keep kids out of foster homes, relief for Hoosiers unable to pay interest fees on property taxes and funding the Mortgage Foreclosure Program requested by Indiana’s Supreme Court to help Hoosiers not lose their homes.”

You can hear the Governor, Speaker and Senate President Pro Tempore in the Leon-Tailored Audio above.  It runs for about 20 minutes. 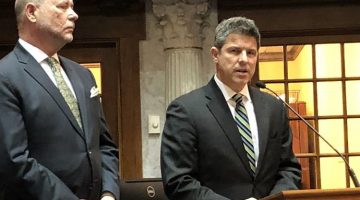