Although Indy Mayoral candidate Joe Hogsett did not show up at a news conference his campaign called to defend his record as U.S. Attorney, two of his top Democratic allies did.

Republicans dropped a mailer showing that according to the U.S. Sentencing Commission, the when Hogsett was U.S. Attorney, the average sentence of one of his criminal prosecutions dropped by 20 percent.   They say the U.S. Sentencing Commission shows that when Hogsett was U.S. Attorney sentencing for gun crimes dropped 16 percent; drug trafficking 14 percent, child pornography 35 percent and robbery 60 percent.

Although they don’t necessarily deny the truth of those stats, Marion County Prosecutor Terry Curry and John Layton are accusing Republicans of distorting Hogsett’s record as U.S. Attorney.   Layton and Curry said those figures are being taken out of context  and that Hogsett has been very helpful in assisting local law enforcement.

You can hear Layton and Curry in the Leon-Tailored Audio that runs 12 minutes. 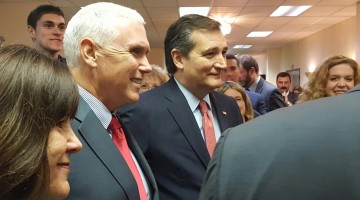