The HEC says plaintiffs in the case include a retired farm family from Hendricks County whose quality of life and property values have been greatly diminished due to air pollution and extreme odors from a newly built concentrated animal feeding operation (CAFO) with 8,000 hogs.

However, Indiana’s Right to Farm Act (RTFA) and a new “right to farm” law passed in 2014 (SEA 186), provide special legal protections to  industrial-scale livestock operations that effectively eliminate the ability of retired farmers and other long-time rural residents, like the plaintiffs, to protect their homes and families from the life-disrupting pollution of a nearby CAFO, according to the complaint.

The HEC also says  Indiana lawmakers recently passed SEA 186 to require regulators and courts to interpret and apply state law in a way that does not impede — and in fact protects — the livestock industry’s use of its preferred industry practices which include the use of CAFOs.  The group argues no other industry or economic sector enjoys the privilege of knowing state government agencies and courts must interpret the law to serve and protect that industry’s special interests and both laws violate Plaintiffs’ equal protection and due process rights, and amount to an unconstitutional taking of their property rights.

Indy Politics spoke with Kim Ferraro of the Hoosier Environmental Council.  You can hear her comments in the Leon-Tailored Audio above.  It runs approximately nine minutes. 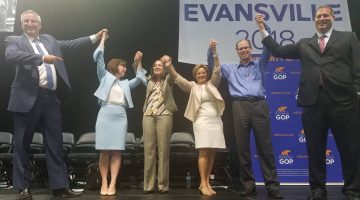