As Indiana lawmakers try to fix last year’s law legalizing cannabis oil, the opposition is coming not from those who are against its use, but those who are for it.

Last year’s law allowed the use of CBD oil for certain kinds of pediatric epilepsy, but failed to legalize its sale.Indianapolis Senator Mike Young has authored bills offering two different solutions to that problem. One bill would add a bar code to the registration card which authorizes you to buy CBD oil. Stores would have to scan that card, and keep the oil itself in a locked case.

A second bill would legalize hemp extract which doesn’t contain the active ingredient in marijuana. CBD oil contains a minuscule amount, and supporters say the bill needs at least that much leeway.

Proponents said the new rules were too restrictive and would either add costs to businesses or cause Hoosiers to buy the products out of state.

Justin Swanson of the Indiana Hemp Association says tells Indy Politics that today’s testimony gave lawmakers a much better understanding of hemp and CBD Oil and he expects changes to be made in the coming week.

You can hear Swanson in the Leon-Tailored audio above, it runs about 10 minutes.

Next post Democrat to Run for Secretary of State

Previous post Don't Smoke 'Em If You Got 'Em 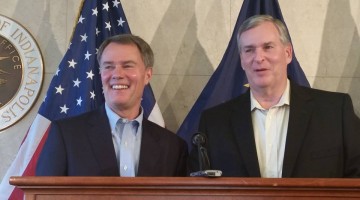 Meeting of the Mayors