Indianapolis Mayor Joe Hogsett tells Indy Politics that despite an infusion of cash from the state, the city still faces long-term financial issues.

The city is getting nearly $50 million in back tax money from the state, as well as another $59 million in road funding dollars.

Hogsett says he is interested in listening in what ideas the Council brings to the table as well as hearing from his department heads.  However, he says the city’s structural deficit can’t be addressed with a one time fix.

He says he administration will be rolling out a plan in the next few weeks.

The Mayor also discusses the recent crime trends and the announcement by Governor Mike Pence to expand early childhood education. 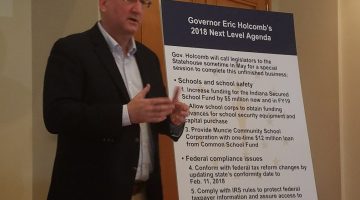