Governor Eric Holcomb and state officials are announcing $4.7 billion worth of road funding projects over the next five years.

Officials spelled out Indiana’s Next Level Roads initiative and shared construction plans for the first five years of a new 20-year program to improve Indiana’s roads and bridges.

The road construction plan for the first five years of Indiana’s Next Level Roads initiative outlines specific INDOT projects that will preserve existing roads and bridges, finish current projects and invest in Indiana’s overall transportation system. The plan outlines approximately $4.7 billion in total investment over the next five years—resurfacing nearly 10,000 lane miles of pavement and repairing or replacing approximately 1,300 bridges.

INDOT is also working with local communities to create similar plans for local roads and bridges and will award funding for local projects through its Community Crossings initiative in the coming months.

The Governor and Speaker also say despite recent problems with Section 5 of the I-69 road project, Hoosiers will see quality roads being built.  You can hear the Governor, Speaker and other officials in the Leon-Tailored Audio above.

To view the construction plan for the first five years of Indiana’s Next Level Roads initiative by project, by county or by statewide totals, visit www.in.gov/indot/ 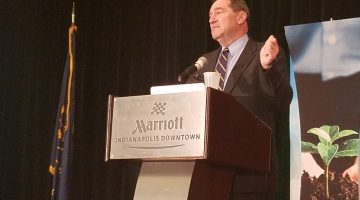