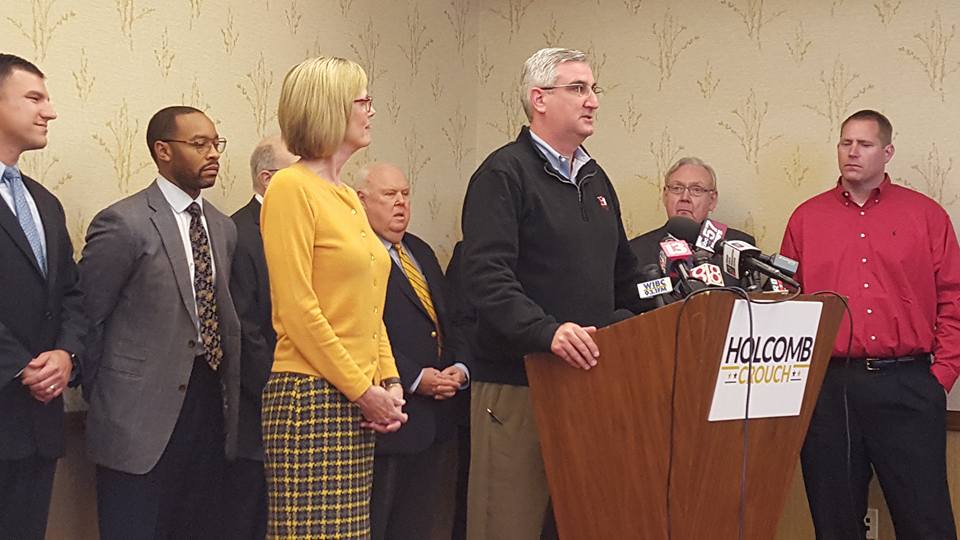 Indiana Governor-elect Eric Holcomb today announced initial plans for the transition of state government with the establishment of his transition board, Next Level Indiana, Inc.  This non-profit entity has been formed to manage the transition and inaugural activities leading up to Governor-elect Holcomb officially taking office in January 2017.

The Governor-elect also met today with his transition leadership team and reiterated his desire to assemble a group of public servants dedicated to the continued prosperity of our state.

“I’m very pleased that this talented, experienced and diverse group of individuals has stepped up to help with our transition efforts,” said Governor-elect Holcomb. “While it’s just a first step, I am convinced that their efforts will set the tone for my administration and ensure that we start moving toward taking Indiana to the Next Level.”

Governor-elect Holcomb added, “As I said on Election Night, I want to build a team of people who care about Hoosiers, people who demand excellence and people who serve others above all else, and I know this is just the group to get the job done.”

Members of the Holcomb-Crouch Transition Team include:

Earl Goode (Co-Chair)
Earl Goode is a former utility company president who served as chief of staff to Governor Mitch Daniels for over six years.  Earl’s current civic involvement includes serving as vice chairman of the Indiana Motorsports Commission and as a member of several not-for-profit organizations.  His past civic involvement includes serving as chairman of the board and as president of the Indianapolis Capitol Improvement Board.

Kyle Hupfer (Co-Chair)
Kyle Hupfer is chief administrative officer and general counsel of Indiana Mills & Manufacturing, Inc.  Kyle previously served as the director of the Indiana Department of Natural Resources for Governor Mitch Daniels and also as the chairman of the Indiana State Fair Commission.  He is currently a trustee at Manchester University and a member of several other not-for-profit organizations.

Allison Barber
Allison Barber, PhD, is the chancellor of WGU Indiana and a member of the State Workforce Innovation Council (SWIC). A former appointee in the President George W. Bush Administration, Allison served at the Pentagon and The White House in various positions focused on military and veteran issues and strategic communication. She currently serves on the boards of Techpoint, the Indiana Chamber of Commerce and the Elizabeth Dole Foundation for Military Families.  She is as advisor to the State Fair, a volunteer for the Pike YMCA and co-chair of the American Heart Association’s Go Red for Women Campaign.

Brian Bauer
Brian Bauer is chief executive officer of Lutheran Health Network, a 969-bed health system serving 23 counties and 1.3 million people in Indiana, Ohio and Michigan. A native of Indiana, Brian was born and raised in Terre Haute and graduated from Butler University where he played football and majored in finance.  Brian was honored as a Sagamore of the Wabash recipient in 2013.

Brian Burdick
Brian Burdick is the managing partner of the Indianapolis office of Barnes & Thornburg, LLP.   He has an extensive background in governmental finance and regulatory matters, previously chaired a statewide transition and has served on many others.  Brian serves on numerous civic boards including the Indiana Chamber of Commerce, the Indiana Sports Corporation and Indianapolis Downtown, Inc.

Anne Hathaway
Anne Hathaway is president of Hathaway Strategies where she works at both the state and national level to provide government affairs, grassroots strategy and management and public relations support to organizations, issue campaigns and Fortune 100 companies. She previously served as program director for the 2012 Republican National Convention and chief of staff at the Republican National Committee.

Rebecca Holwerda
Rebecca Holwerda is the Northwest Regional Director for U.S. Senator Dan Coats. Prior to that role, she was the project manager for a healthcare organization reaching Illinois, Indiana, and Michigan.

Jeff Knight
Jeff Knight is executive vice president and chief legal counsel for Old National Bank headquartered in Evansville, Indiana.  Jeff’s civic and volunteer activities include being chairman of the University of Southern Indiana Board of Trustees and a board member of the Welborn Baptist Foundation and the Indiana Legal Foundation.  He is also a member of the Indiana Business Law Survey Commission and the Board of Visitors for the University of Evansville.

Blair Milo
Blair Milo is in her second term as mayor of La Porte, Indiana.  Having been elected at the age of 28, she is the youngest female mayor in the state.  Prior to becoming mayor, Blair served in the U.S. Navy conducting multiple tours in the Arabian Gulf aboard the USS Mason and Destroyer Squadron 50 before finishing her active service at the Pentagon.  She continues to hold the rank of Lieutenant Commander in the U.S. Navy Reserves.

Jim Morris
Jim Morris is vice chairman of Pacers Sports and Entertainment, Inc.  He previously served as chief executive officer of IWC Resources Corp. and its subsidiary, Indianapolis Water Company. Jim also served as the executive director of the United Nations Food Program.  He continues to serve on numerous corporate and not-for-profit boards.

Jamey Noel
Jamey Noel is currently the sheriff of Clark County, a position he has held since January 1, 2015. He retired from the Indiana State Police after 22 years as an Assistant District Commander, and has extensive law enforcement & homeland security training.  Jamey also has 29 years of experience in EMS and in the fire service as chief.

Ed Simcox
Ed Simcox is currently the president emeritus of the Indiana Energy Association after having served as president of the association from 1986-2010. He served eight years as Indiana’s Secretary of State as well as in numerous other political positions for officials including Governor Ed Whitcomb, Senator Dick Lugar and Senator Dan Coats.

Becky Skillman
Becky Skillman served eight years as Lt. Governor alongside Governor Mitch Daniels and from 1992-2004 in the Indiana Senate. She is currently senior advisor for Radius Indiana, a regional economic development corporation in south-central Indiana and the lead director on the Old National Bank Corporate Board.

Jamal Smith
Jamal Smith is the District Athletic Director for Indianapolis Public Schools.  He previously served as the executive director of the Indiana Civil Rights Commission and is the founder of The Lead Change Project.  Jamal also previously served as an Assistant Basketball Coach at Arsenal Technical High School helping to lead the boys’ team to earn the 2014 Indiana 4A State Championship title.

Susana Suarez
Susana Suarez is an elected and appointed official who brings more than 20 years of experience in federal, state and local government. She is also a small business owner with 15+ years of executive corporate experience. Susana is married with two small children and lives in Zionsville, Indiana, where she’s the president of the Town Council.

Rudy Yakym III
Rudy Yakym III is senior vice president at Bradley Company, a full service commercial real estate firm. He is an active participant in the community and state and serves on the St. Joseph County Boys and Girls Club Board of Directors, the IU South Bend Alumni Board, and the Indiana Judicial Nominating Commission.