Indiana veterans are demanding more funding for programs in the wake lawmakers amending legislation that would have created a scratch-off lottery ticket that would have benefited vets.

Plans for a new scatch-off lottery game where the proceeds would have gone to state programs for veterans was scrapped in the General Assembly in favor of dedicating $500,000 of the lottery of revenue to those programs.   Although veterans groups say a new scratch-off game would have generated between $1 – $2 million annually, some lawmakers were concerned that proceeds would drop off after the first ew years as has happened with other new scratch-off games.

Members of the Indiana chapter of the The American Legion say they plan to push for the new game as well as demand lawmakers fully fund veteran programs.

You can hear the veterans in the Leon-Tailored Audio above.  The news conference runs about 20 minutes. 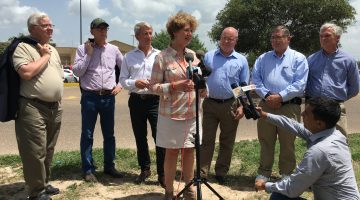 Brooks at the Border