Republicans are expected to pick up at least City-County Council seat under new maps drawn by Democrats.

The new maps were unveiled this past Friday.

Currently, Democrats hold a 19-5 majority on the Council,  That number was 20 until Councilor Ethan Evans left the caucus and became an independent.

Council President Vop Osili says the maps were the result of a months-long process that began with a series of ten public forums designed to prioritize input from residents.

And there are two Districts one on the north side and one on the south side with no incumbent.  In addition, there are now 10 majority-minority districts.

Democrats also took a pass on an independent commission drawing the maps and instead hired attorneys at Ice Miller to draw the maps for approximately $300,000,

The new maps are expected to be approved sometime next month.

You can hear Council President Osili and Vice-President Zach Amdamon in the Leon-Tailored Audio above.

The new proposed maps can be found here. 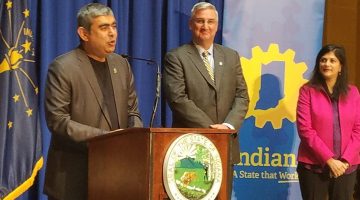