It’s hard to see it every day, but the vast majority of Hoosiers want the same things and share the same values.

We want to earn a good paycheck and provide for our families in a rewarding job. We want to have access to affordable health care. We want to send our kids to good public schools with great educators. We want safe communities. We want everyone to belong, no matter the color of their skin, whom they love or the ZIP code they call home. We want the previous generation to retire with dignity through the help of Medicare and Social Security. And most importantly, we want to create a better future for the next generation.

The advancement of these American and Hoosier ideals and our republic’s very foundation rests on a healthy, functioning democracy. Indiana Democrats would argue that the past 10 years have made that less and less attainable, especially here.

At the end of the last decade, the Hoosier State still leaned red, but our elections were more competitive. Public offices were more balanced between the parties, and policies were debated and refined with both parties and their constituencies at the table.

Most importantly, there was mutual respect between both sides.

But with gerrymandered districts that are 95% more biased toward its side compared to the rest of the country, the Indiana Republican Party has been more focused on power, control and extreme partisanship in recent years. Republicans shoved through “right to work” laws to dismantle worker rights and create a “work more for less” economy.

They consistently defunded public schools (until this past session when President Joe Biden’s American Rescue Plan literally rescued the biennial state budget). The entire Indiana Republican Party has waved the white flag on the COVID-19 pandemic.

And lastly, Attorney General Todd Rokita has made it a point to wake up every morning wondering how he can throw a political grenade over to Gov. Eric Holcomb’s office on the taxpayers’ dime.

It seems as if Indiana Republicans want to double down on this narrow-minded path, and their actions over the summer reflect it.

They held redistricting “hearings” across the state without proposed maps and without taking questions. While Holcomb and state Rep. Timothy Wesco promised a process that would be “fair” and “transparent,” the maps were drawn unfairly, without any transparency, and with the help of a $1,300-an-hour Washington, D.C., Republican consultant the party hired to do the job.

When you boil it all down, we have a political system in Indiana that does not reflect the will of the people. While most Hoosiers, as stated previously, want and value the same things, we have a government that benefits a select few and limits debate and the hearty exchange of ideas.

There are two paths forward: We can strive for a healthy, two-party government at every level that delivers for Hoosiers, or we can live with the status quo with daily political distractions where no one wins.

The proposed maps make it clear Indiana Republicans prefer the latter. We all deserve a system where the voters pick their representatives – not the other way around.

In the months and years ahead, Indiana Democrats will continue to work overtime to deliver a brighter future for all Hoosiers where voting rights are expanded, workers make a livable wage to provide for their families, our public schools and teachers become some of the best in the country and every Hoosier feels as though they belong.

Our party is big, bold and welcoming, and we look forward to offering Hoosier voters the better path forward in the elections ahead.

Mike Schmuhl is the Chairman of the Indiana Democratic Party. 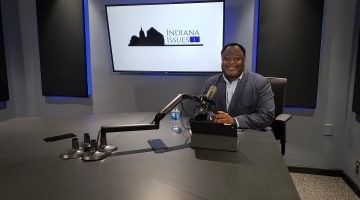