Org Day (And a Couple Other Items)

On Organization Day, which is mostly ceremonial at the Indiana General Assembly, House Republicans beat back a Democrat-sponsored rule change that would have mandated that lawmakers wear masks or other face coverings in the chamber.

The measure was defeated 68-24.  Democrats say if the public is compelled to wear a mask in the Statehouse, so should lawmakers.  Republicans say 98 percent of lawmakers in the Chamber wore masks and the measure was not thought out well.

You can hear House Speaker Todd Huston talk about the proposal, as well as other matters,  in the Leon-Tailored Audio above.

It runs for about 24 minutes. 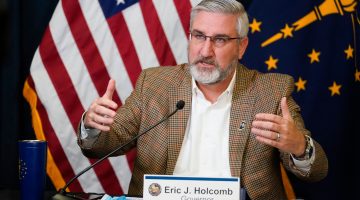