The leader of the Indiana House Democrats says someone in his party needs to step up soon if they want to take on Republican Mike Pence in 2016.

Speaking to the media this morning on a number of issues, Scott Pelath of Michigan City, said someone from his party needs to step up and be the voice for the middle class.

Former Speaker John Gregg and former Congressman Baron Hill top the list of Democratic contenders for 2016 and Superintendent of Public Instruction Glenda Ritz has not ruled out a gubernatorial run, even though she says her goal is to run for re-election.

Pelath says he is concerned that no declared candidate makes it difficult for Democrats to get their message out.  Pelath also downplayed recent polling that has the Governor’s approval ratings north of 60 percent.  He says that number is soft and will come down whenever the campaigns get underway.

You can hear Pelath’s comments below.  Each segment runs approximately 15 minutes.  He also discusses the House GOP budget and proposed changes to the school funding formula, efforts to repeal the common wage construction law, as well as other examples of what he cites as “power drunkenness” by Statehouse Republicans. 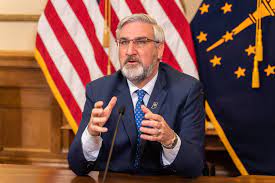