In his State of the State address, Indiana Governor Mike Pence is telling lawmakers that any legislation they send him that that adds sexual orientation and gender identity to the state civil rights code must protect also protection for religious freedom and conscious.

The Governor did not endorse any of the particular proposals in front of lawmakers, however he said he will give careful consideration to any proposal they send him.

Pence said no one should be harassed or mistreated because of who they are or who they love or what they believe.  He alluded that he came to this conclusion after months of talking with Hoosiers on both sides of the issue.

The Governor said he was confident that Hoosiers could come together and reach a workable solution.

In addition to staking out a position on possible LGBT rights legislation the Governor also highlighted his 21st Century Crossroads plan which provided a billion dollars in road funding for state projects and he reiterated his support for the Senate plan which provided nearly $420 million in local road funding.   While the Governor said he appreciated the work done by House Republicans which would provide nearly $500 million in new funding, in part, by indexing the state’s sales tax on gasoline and motor fuel taxes to inflation, Pence said this session was not the time for a tax increase saying he wanted to keep Indiana’s economy growing.

The Governor also touted a new economic development plan; calling for the creation of a fourth port in southeastern Indiana.

Pence  also touched on  Indiana’s unemployment rate which was eight percent when he took office and is now 4.4 percent.   The Governor also discussed the need for more drug treatment and cracking down on drug dealers in order to address Indiana’s meth and heroin problems.  And he reiterated that schools should be held harmless with respect to the 2015 ISTEP exam.

The text of the Governor’s speech can be found here. 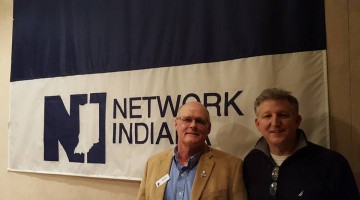