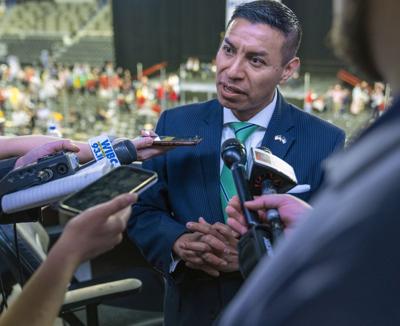 The race for Indiana’s next Secretary of State – typically a low-interest, down-ballot contest – has become a referendum on the future of the Indiana Republican Party with a rare statewide opportunity for hopeful Democrats.

“I have a vision for the Office of the Indiana Secretary of State that delegates believed in and overwhelmingly endorsed at the convention,” Morales wrote in an emailed response to the Chronicle. “My job now, though, is to bring everyone together to focus on November and deliver that same message to Hoosiers across the state.”

He’ll face Democrat Destiny Scott Wells – a party executive, lawyer and military intelligence officer in the U.S. Army Reserve. Also on the ballot: Libertarian Jeff Maurer, a development officer for an international Libertarian nonprofit with experience in the technology industry.

Republicans dominate Indiana’s government, but Democrats are hoping controversy over Morales’ campaign goals and history working for the Secretary of State’s office will give Wells a boost.

“This race is usually a sleepy race, and it’s definitely not this year,” Wells said. “Democracy is on the ballot this year because of the Election Division being in the Secretary of State’s office and elections not being off the table as far as partisan gamesmanship.”

But all three candidates said election security was their top priority.

Each support the use of mail-in ballots in at least the limited situations described under state law; want some paper component to all voting and want the office to take a more active role in disseminating accurate election-related information.

Morales’ vision includes establishment of an election fraud investigation team, reducing Indiana’s early voting period from 28 days to 14 days and requiring potential voters to include copies of their photo IDs in applying for mail-in ballots.

Republicans have traditionally upheld Indiana’s nearly month-long early voting period as a reason to maintain limits on the reasons Hoosiers can qualify for mail-in voting.

Morales wrote that Hoosiers should vote in-person early or on election days because they’re “the most secure ways to cast your vote.” Maurer, the Libertarian, said voters should cast their ballots on Election Day to limit “opportunities for vulnerabilities.”

However, both men supported the use of mail-in ballots in limited situations.

“There are situations where mail-in absentee ballots are necessary as well, such as for those serving in the military or for those that are disabled,” Morales wrote, “and in those limited situations I would support the ability to vote absentee by mail.”

“There’s about a dozen different exemptions for why [mail-in ballots] are used, so I don’t plan on changing those,” Maurer said. “But I am not advocating for expansion.”

Wells, the Democrat, said she would expand the list, which also includes being out of town.

“They confuse voters,” Wells said of the exemptions. “Voters are kind of scared to even file absentee.”

“I believe [mail-in voting] can be done in a responsible and secure way,” she added. “[It’s been] illustrated in other states already and illustrated here in Indiana, when we were up against the wall during Covid and had to get a little creative.”

Indiana was one of just eight states using paperless voting equipment in its 2020 elections, according to a white paper from Indiana University’s Public Policy Institute.

It’s a vulnerability the state is seeking to remedy with a $12 million investment in small printer add-ons, known as a voter-verifiable paper audit trail. The plan has garnered skepticism, but also a better-than-nothing acceptance from some academics and voting rights advocates.

The trio of secretary of state candidates agreed paper should play a bigger role in Indiana’s elections, but had different ideas of method.

Need to get in touch?

Have a news tip?

“There must be a paper component tied to every vote cast. That is a must. If not, we can turn into the next Georgia or Arizona,” Morales wrote.

For Morales, the printer retrofits would be just an initial step.

“I will work with county clerks to make sure we continue to transition away from [electronic-only] machines,” Morales said. “The paper audit trails are a safeguard, but there will always be questions when you deal with (direct-record electronic) machines.”

Wells said she instead believes Indiana should return to paper-only ballots.

Voter-verifiable paper audit trail technology, she said, “is a bandaid on top of … electronic machines that are a security risk.”

Maurer, meanwhile, is campaigning to give voters paper receipts for their votes.

“[It’s] a verified piece of proof that you, the voter, can take home with you to show that your vote has been recorded accurately,” Maurer said, instilling confidence in a process he called “opaque” and “untrustworthy.”

Cracking down on misinformation

The three secretary of state candidates upheld the results of the 2020 elections, but to varying degrees.

“As I have said many times, Joe Biden is the President of the United States,” Morales wrote, before reaffirming his support for former President Donald Trump.

But, he added, “There are still questions around the 2020 election and we need to learn from those.” For Morales, most of those doubts arise from pre-election law changes and signature-matching “anomalies.”

“Does it mean that the 2020 election was rigged or compromised or stolen? No,” he said. “I don’t know. I don’t believe that. I genuinely accept the results of the 2020 election. The problem is that we can’t prove that it was right.”

Wells, in contrast, was firm in her acceptance of 2020’s results.

Asked if she believed the elections were stolen, Wells said, “Absolutely not. Any elected official or candidate that continues to peddle that theory is a threat to our democracy.”

Despite their differing perspectives, each candidate said the Secretary of State’s office has a role to play in combating misinformation.

Morales said the state could improve on its “okay elections with good cyber security,” and could be forthcoming with information on any data breaches, plus attempts to recover from and prevent security violations.

Wells and Maurer suggested proactively putting out correct information and shutting down unfounded rumors. Maurer’s campaign also includes a push to “completely” audit all elections before officially certifying the results.

Morales, as a Republican in modern-day Indiana, is likely to win in November. Hoosiers last elected a Democrat to the position in 1990: appointed incumbent Joe Hogsett, now mayor of Indianapolis.

But Morales has also been dogged by attacks that he’s an election denier, along with criticism of his work history for the Secretary of State’s office.

He left jobs in the office twice after being written up for poor job performance, once under then-Secretary Todd Rokita, and again under former Secretary Charlie White. The Associated Press first reported the disciplinary actions during Morales’ unsuccessful 2018 congressional bid.

Morales told the publication this year that the actions were “probably office politics.”

Morales’ nomination, he told the Chronicle, was because “hard work pays off.”

“That is the story behind my historic win to be the Republican nominee for Secretary of State,” he added. “I have crisscrossed all 92 counties multiple times telling delegates my American Dream story and sharing with them the qualifications I have for this office.”

GET THE MORNING HEADLINES DELIVERED TO YOUR INBOX 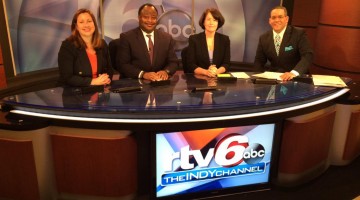