The Senate has rejected anti-abortion activists’ demand for an abortion ban with no exceptions for rape or incest.

Days after quitting the Senate Republican caucus over leaders’ failure to push for a no-exceptions ban, Indianapolis Republican Mike Young introduced an amendment to do it. The proposal would have legalized abortion only to save the mother’s life.

Declaring “exceptions equal death,” Young argued a rape or incest exception punishes an unborn child who has done nothing wrong. He says a pregnancy in those circumstances creates life just as much as a pregnancy in a marriage or between a boyfriend and girlfriend, and argues the Senate should speak for those who can’t speak for themselves.

Republicans split evenly on the proposal. With all Democrats voting no, the amendment was defeated 28-18.

And Columbus Republican Greg Walker (R), while declaring himself staunchly pro-life, predicted passing a no-exceptions ban would actually lead to more abortions, not fewer, by leaving rape victims with no one from whom to seek counseling about “the most difficult decision of their life.” He says that will make them more likely to choose the most desperate option.

The vote creates doubt about whether the bill can pass the Senate. National Right to Life has described LaGrange Sen. Susan Glick’s (R) bill as a “wolf in sheep’s clothing.” The organization, and dozens of abortion opponents who testified at a Senate hearing this week, urged senators to reject any bill containing exceptions other than for the life of the mother. If 15 of the 18 yes votes on Young’s amendment take that stand, their votes plus expected Democratic, no votes would defeat the bill.

On a voice vote, senators added a provision allowing the attorney general to prosecute cases when a local prosecutor has a blanket policy of not doing so. The amendment is aimed at Marion County Prosecutor Ryan Mears (D), who has already announced he won’t file abortion cases no matter what legislators pass. The Senate has passed similar bills twice before, but the House has declined to consider them. 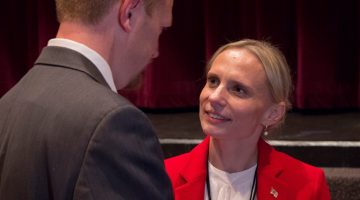