With about a week to go before the temporarily adjourn, Indiana lawmakers got some good news when it came to the state budget and sent Governor Eric Holcomb some bad news by overriding one of his vetoes.

In Thursday’s revenue forecast, lawmakers were told the economy is going so well, they can expect to bring in about $2 billion over projections.

At the same time, the House and later the Senate overrode Governor Holcomb’s veto of legislation which would have given lawmakers the power to call a special session.  The Governor has argued that such a bill was unconstitutional.  Lawmakers argued they do have the authority to do so and were only doing it so they could have input in future emergencies.

You can hear the revenue forecasters as well the House and Senate Republican leadership in the Leon-Tailored Audio above. 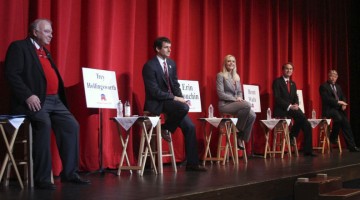