One of the first acts of the new Indianapolis City-County Council leadership was to remove the body’s former President from his post as chairman of Public Safety committee.

President Vop Osili, along with Minority Leader Mike McQuillen and Minority Leader Monroe Gray approved a new list of committee assignments. Stephen Clay, who appointed himself Chairman of the Public Safety committee was removed and replaced with Leroy Robinson.

In addition, Republicans were removed from their chairmanship positions (ethics, rules, public works), however the make up the committee assignments was reduced to more traditional majorities with Democrats only holding a two seat majority on two committees.

Now that the committee assignments are done Osili says they can get to work on providing the funding for street and pothole repair, as well as addressing the city’s other issues.

You can hear Osili and McQuillen in the Leon-Tailored Audio above, which runs about five minutes. 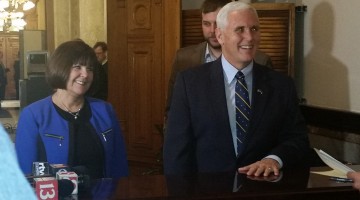