Eric at the End of the Year

Despite a revenue forecast that has Indiana lawmakers concerned as to whether the state will be able to meet all its growing obligations, Indiana Governor Eric Holcomb tells Indy Politics his administration will find money to fund DCS, Medicaid and more money for education.

Holcomb made his comments during his round of annual end of year media interviews.

Revenue projections unveiled this week show the state taking in more than $800 million in new revenue, but the growing demands of DCS and Medicaid only leave the state with about $12 million in new funds at the end of the biennium, if those requests are fully funded.

The Governor says his office will unveil its budget blueprint on January 10 where he says they will spell out more details.

In addition to discussing the state’s finances the, Governor also discussed workforce development, bias crimes, his possible re-election bid and rumors that he might be considered Ambassador to Italy by the Trump administration.

Each of the Leon-Tailored Audio podcasts run about nine minutes. 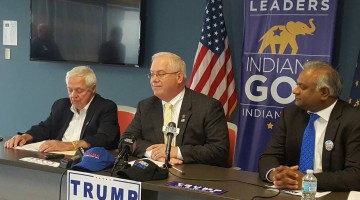