Indiana Governor Eric Holcomb Monday said he made an “unforced error” by picking up food and taking a photo with a mother and her daughter while in Brown County this past weekend.

Holcomb was staying at the Governor’s residence in Brown County and during a trip to pick up food, he took the photo but did not follow proper COVID-19 protocols such as wearing a mask or maintaining a social distance of six feet.

In today’s virtual media briefing he told Indy Politics it was not a matter of  “do as I say not as I do”   but a reminder that the six-second photo op was a problem.   It was an unforced error – completely my fault.  I  had the mask in the car, and take it everywhere I go,” Holcomb said.

He went on to say that no one has been harder on him than himself and had he thought about it, taking the photo with the mask and properly distanced would have been a great example.

You can hear Holcomb in the Leon-Tailored Audio above.  He discusses a number of other issues such as the steps businesses should take while preparing to open, as well as the data being used to determine when Indiana either has or will hit its peak of COVID-19 cases. 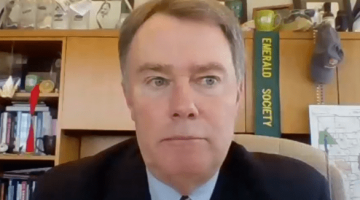