Governor Eric Holcomb made a stupid mistake, and he admitted it.

This weekend, while at the Governor’s residence in Brown County, he went to go pick up food and forgot to put his mask on and while inside took a picture with a couple of people who were happy to see him.

The photo went up on Facebook, which means it went viral, and now the group I fondly label as the “Holcomb Haters” are demanding his resignation.

The Governor did apologize.

In a written statement, he said, “I spent the night at the Governor’s residence in Brown County. I ordered take out for dinner and ran in to pick it up, leaving my mask in the car. It was a lapse in my usual vigilance. I should have gone back out to the car to get my mask, My apologies to all the healthcare professionals and Hoosiers who are working so hard to slow the spread. This is been a timely reminder that even a six-second snap of a picture requires following the doctors’ recommendation to wear a mask while in public. Lesson learned.”

This also happened a day after the Holcomb announced easing restrictions on Indiana businesses by beginning the phased-in approach to re-opening Indiana.

I think we can all say this was not one of the Governor’s better moments, but it also isn’t an impeachable offense.

As Governor, Holcomb has an additional responsibility to make sure things like this don’t happen, but he’s also human, so things like this are going to happen, regardless. The trick is to do what the Governor did, own it, and apologize.  You also use it as a teachable moment to remind people of how to help prevent the spread of COVID-19 and while staying vigilant is important.

You do that, and most people move on.

Of course, the Governor’s critics and political opponents are going to pounce on the opportunity. If I were them, I would too. With nearly $8 million in the bank, approval ratings north of 60 percent on his handling of COVID-19, an hour of daily earned statewide media every day for almost five weeks, an election less than six months away and by any objective measure, token challenges at best, for now;  I’d take whatever I could get and run with it, provided I remembered to wear a mask and engage in social distancing while doing it.

Abdul -Hakim is the editor and publisher of IndyPolitics.Org.    He is also a licensed attorney in Indiana and Illinois.  His opinions are his own, but you are free to share them, provided you remember to maintain good COVID-19 protocols. 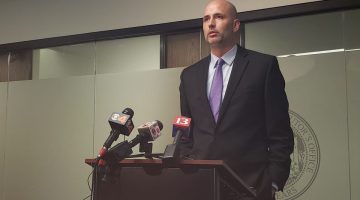