Despite possible vetoes by Mayor Greg Ballard, the Indianapolis City-County Council closed out the year by giving itself a 44 percent pay raise and requiring gun owners whose weapons are stolen to report them police or pay a fine.

Democrat Kip Tew who sponsored the stolen gun proposal.  It calls for any gun owner whose weapon is stolen or lost to report it to the Indianapolis Metropolitan Police Department or face a $50 fine.   Tew said the the measure was needed to help fight gun violence and give law enforcement another tool to fight crime.  However, opponents like Republican Jack Sandlin said the ordinance runs contrary to state law prohibiting local governments from enacting gun ordinances stricter than the state and it also puts an undue burden on responsible gun owners.

On the issue of salary increases, sponsor Mary Moriarty-Adams said Councilors had not received raises in since 2001, although she admitted there was never a good time to do it.  Republican Christine Scales opposed the raise, saying it was not fair for the Council to get a raise for a part-time job while many full-time city employees have not gotten raises.  The proposal would raise the Council’s salary from $11,400 to $16,000.  Language that would have raised Mayor-elect Joe Hogsett’s salary from $95,000 to $125,000 was removed.

Both measures are likely to be vetoed by Mayor Ballard, which 19 votes would be needed for an override.

You can hear most of the debate on both measures in the Leon-Tailored Audio above. 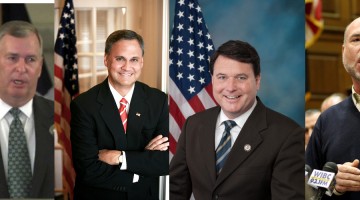