Hill; Parties Should Not Play Politics with Supreme Court Nominees

Hill made the reference today during a news conference today where he reaffirmed his support for Supreme Court nominee Neil Gorsuch.

Hill said both parties should stop playing politics with Supreme Court nominees and said Barack Obama’s selection for the court, Garland Merrick, would have made a fine jurist.

You can hear Hill’s comments in the Leon-Tailored Audio above.  They run about 12 minutes.

The Judicial Action Network has run attack ads against U.S. Senator Joe Donnelly saying he should come out an commit to an up or down vote on Gorsuch.    To date, Donnelly has never publicly supported a filibuster of Gorsuch’s nomination.

Previous post Bosma, Hershmann; We Can Work It Out 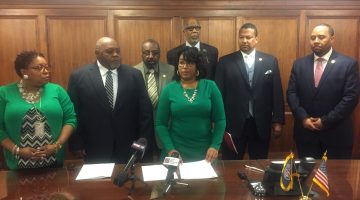