Indianapolis Mayor Joe Hogsett is touting a proposed budget his administration says spends less than the last year’s and cuts the structural deficit in half.

For months, the administration has been saying the city has a $55 million structural deficit.

Hogsett officials say they managed to cut that deficit in half by holding the line on spending and implementing a smart hiring program where the city would only fill necessary vacancies and making adjustments to the pension benefits for new hires.

Despite that, the city still has a structural deficit of about $24 million.

The $1.09 billion plan has increases in public safety and criminal justice.  It also includes spending $50 million annually for the next four years on city roads and streets.    The city will also fund existing commitments for new police, fire and solid waste vehicles.

The Mayor made his  formal budget introduction at tonight’s City-County Council meeting.

You can hear his comments in the Leon-Tailored Audio above, as well as  from Council President Maggie Lewis and Republican Leader Mike McQuillen.

Click Here for a General Overview of the Mayor’s Budget 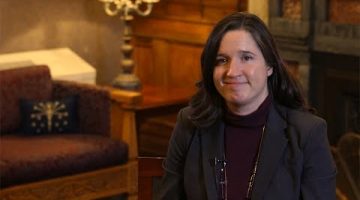