As Congressional Republicans begin the process of repealing and replacing the Affordable Care Act, Governor Eric Holcomb tells Indy politics they should look at HIP 2.0 as a model for the rest of the nation when it comes to what do about Medicaid expansion.

Republicans are trying to decide what to do about Medicaid expansion.  The original proposal would freeze Medicaid enrollment at its current levels and grandfather in anyone who received coverage through Medicaid expansion. However, in 2020 any new enrollees who are able-bodied, the Indiana would have to pick up more of the tab.

Currently, the federal government picks up 100 percent of the Medicaid expansion costs until 2020 when that number drops to 90 percent. The state would have to pick up 35 percent of the expenses for any new enrollees who are able-bodied, not disabled, low-income adults.

Holcomb says HIP 2.0 works, and it shows the state can deliver services to those most in need.  He says he has been communicating with the state’s Congressional delegation to make sure HIP 2.0 is preserved.

You can hear the Governor in the Leon-Tailored audio above.  It runs about 10 minutes.

The Governor also talks about the proposed increase in the cigarette tax as an indirect way to plug the budget to help pay for road funding, early childhood education funding, as well as whether the Superintendent of Public Instruction will become an appointed position. 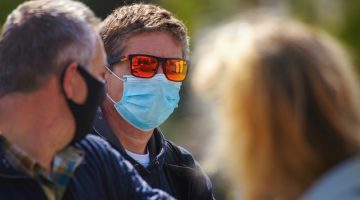