Secretary of State Connie Lawson says thousands of wrongful absentee ballot applications may have been sent out by Indiana Democrats.

Lawson say she was informed yesterday by an attorney for the Indiana Democratic Party acknowledging they mailed out defective absentee ballot applications and she estimated there may be hundreds of thousands of these applications in circulation.

The applications did not include certain language mandated by the state so they were not in compliance with the law.

Lawson says she asked the co-directors of the Indiana Election Division to approve these forms to ensure voters are not disenfranchised by the party’s mistake.

Applications for absentee ballots are approved at the county level so if there is an issue, the county election board has jurisdiction.

Lawson says  there are counties that have rejected the defective ballots for not complying with state law, but she could not name specific ones. She also says she has worked with the co-directors of the Indiana Election Division to make an exemption for the Indiana Democratic Party’s defective applications.

You can hear Lawson in the Leon-Tailored Audio above.  It runs under 15 minutes. 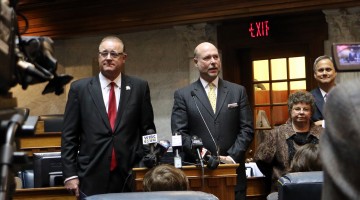