Marion County Prosecutor Terry Curry says his office went to court nearly 50 times in 2017 to get guns out of the hands of individuals who were a danger to themselves or others.

The recent school shooting in Parkland, FL has raised awareness about what has been called Indiana’s “red flag” law, where prosecutors and law enforcement can step in and remove guns from the hands of mentally or emotionally unstable individuals, however, there is a hearing to guarantee they have due process.

The law, also known as “Laird’s Law” is named after former Indianapolis Police Officer Jake Laird who was killed in the line of duty in 2004, by an individual who had mental health issues.

Laird was shot and killed after responding to a call of a man walking in a neighborhood street with a rifle. Several other officers were also hurt.

Curry says his office used the law 46 times in 2017.  In many instances, Curry says the weapons were turned over willingly.

The state prosecutors association has also called the law useful.

“Law enforcement is finding this law an effective tool. The law may be applied in one of two ways: the officer may file an affidavit asking the court for permission to remove guns and the judge will set it for hearing; the other way would be for law enforcement to act to take the guns, then file a notice with the court and the court will set a hearing within 14 days to determine the fate of the guns,”  noted Dave Powell of  the Indiana Prosecuting Attorneys Council. “It’s important to recognize that this law is not a forfeiture action – law enforcement does not keep the guns. They may eventually be returned to the defendant or to a trusted family member.”

You can hear Curry in the Leon-Tailored audio above.  The interview runs about five minutes. 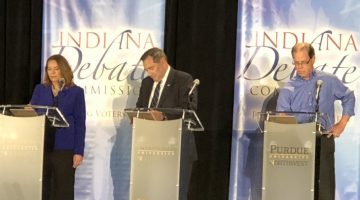