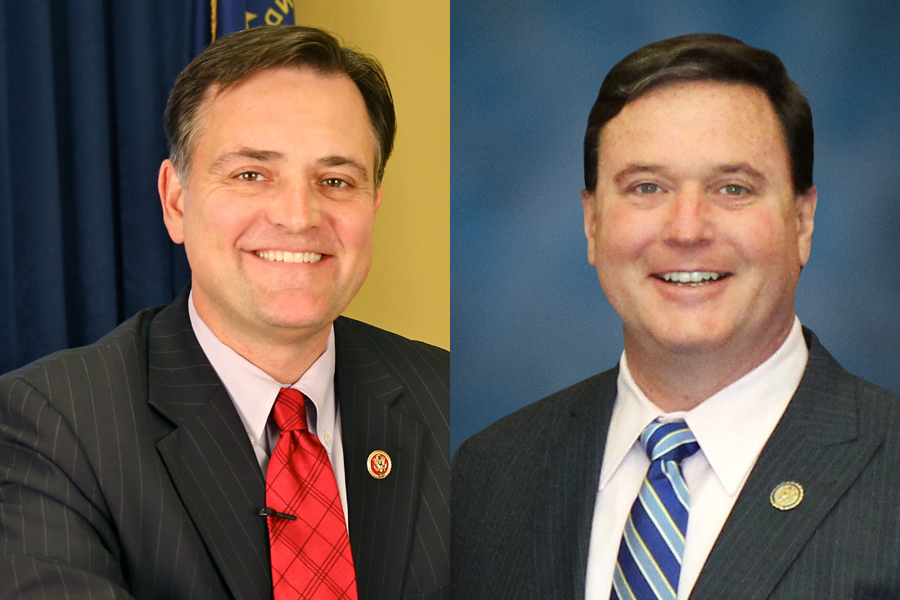 Although neither is a declared candidate for the U.S. Senate the war of words been Congressmen Luke Messer and Todd Rokita would make you think it was a few days before the May primary.   I got this e-mail from the Messer campaign this afternoon…

For months, Todd Rokita has spread lies and half-truths about my family, claiming we are not Hoosiers and attacking my wife’s legal career. He started by planting misleading news stories and whispering distortions in back rooms. This past weekend, he lifted the veil and directly attacked my wife and family in a television interview.

What’s changed? Now, Todd Rokita wants to run for the U.S. Senate, and it’s clear that he will do and say almost anything to advance his political career. Apparently, truth or integrity won’t get in the way.

Despite his lies and attacks, Congressman Rokita knows the truth about my family.

I am a born and raised Hoosier who now represents Indiana’s 6th Congressional district. I own a house in the community where I grew up – Greensburg, and that is where I stay when I’m home. In fact, I purchased the house with my mom sixteen years ago, before I was married. It is my first home, and the only home she’s ever owned.

My kids are also Hoosiers. The only reason my kids are in school in the D.C.-area is because of my service in Congress. When first elected, our family counseled with the folks we trusted most: my predecessor in Congress, Mike Pence and his wife Karen. Their advice was clear: protect your family, and do not leave them behind while serving your state and nation.

For me, the choice was easy. Growing up in a single-parent family without a Dad at home, I knew first-hand that children need a full-time father. Because my family is with me today, I drive our kids to school and coach my ten-year-old son’s football and basketball teams. My wife and I go on an occasional date, and our family worships together every Sunday. I also consistently and regularly come home to Indiana to meet with constituents and serve our state.

We have never hidden any of this from our constituents. At public appearances, Jennifer and I regularly thank our district for allowing our family to serve together. And, there have been repeated news stories about our family’s decision to stay together throughout my time in Congress.

Just as remarkably, Todd Rokita has also resorted to attacking my wife, questioning her legal service to the City of Fishers. Despite the distortions, the truth is clear: my wife is a distinguished Indiana lawyer who has practiced in Indiana her entire legal career. And, she began representing her client almost eight years ago, long before I was ever elected to Congress.

I am proud of my wife. She has built an outstanding career, and it is only fair that she be allowed to continue that work while I serve in Congress. It is simply sad that Todd Rokita would attempt to destroy my wife’s career for his own political gain.

In response to that e-mail, I got this from the Rokita campaign…

We will respond to this and set the record straight.  Luke Messer is unhinged. Todd had nothing to do with the Associated Press reporting.  Messer thinks pounding the table and feigning outrage can make people overlook very real vulnerabilities that Donnelly and national Democrats will exploit.  Now we can add a ticking time bomb to the list of Messer’s vulnerabilities.  Imagine how Messer will fly off the handle when Donnelly’s allies spend $40 million litigating the serious vulnerabilities he wants to sweep under the rug.

Here are a few things to keep in mind going forward.

Strap yourselves in, it’s going to be a bumpy flight, to say the least.

Abdul-Hakim is the editor and publisher of IndyPolitics.Org  His opinions are his own and everyone should be thankful for that.