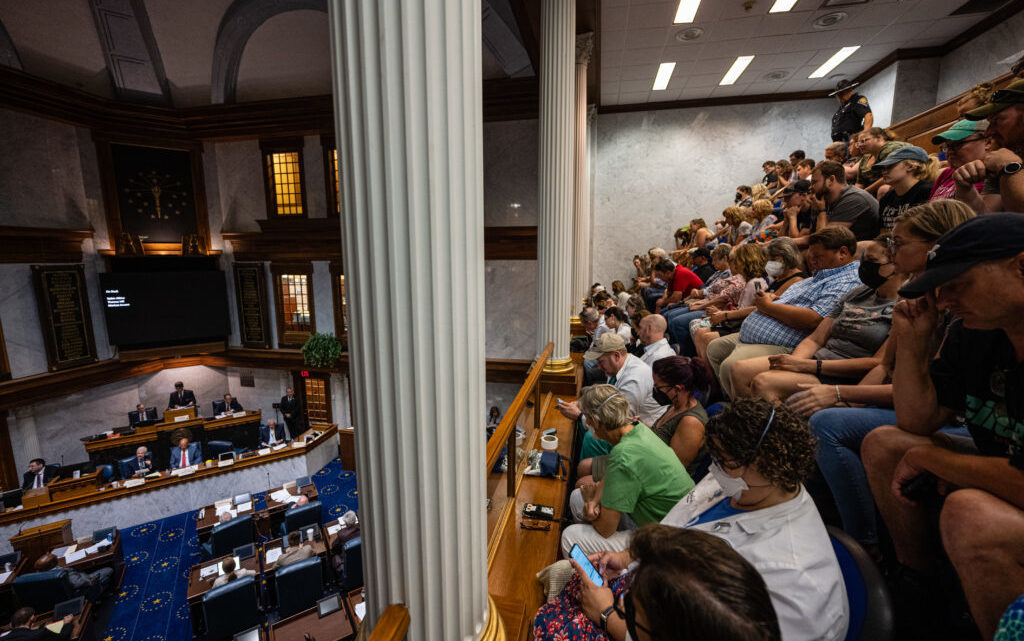 Droves of abortion-rights and anti-abortion activists who descended on the Indiana Statehouse Monday were opposed to a Republican proposal that would ban virtually all abortions in the state.

The widespread pushback indicates an upward battle for Indiana’s Republican supermajority, which is seeking to limit access to abortions in Indiana after the U.S. Supreme Court overturned the landmark Roe v. Wade opinion in late June.

The General Assembly reconvened for a special legislative session Monday to weigh the abortion ban, as well as financial supports for women, babies and families. Lawmakers will also debate inflation relief for Hoosiers.

The abortion-restricting bill unveiled by Senate Republican leadership last week would ban abortion at conception except for narrow exceptions for fatal fetal anomalies, rape, incest and the life of the mother. But lawmakers indicated that could change in the coming days.

Indiana currently allows abortions up to 20 weeks of gestation. If the bill is enacted, the state will have one of the most restrictive abortion laws in the nation. Oklahoma and Missouri ban abortion at conception and the only exception is for the life of the mother.

Bill is likely to be amended

Bill author Sen. Sue Glick, R-LaGrange, maintained Monday the legislation won’t impact treatment of miscarriages, ectopic pregnancies, or fatal fetal anomalies. The legislation also would not limit access to the “morning after” pill or any forms of contraception.

The bill’s current language would allow the procedure in instances of rape, but only until 20 weeks of gestation, as outlined in current state law.

Democratic Sen. Shelli Yoder of Bloomington argued that girls may not “even be within the realm of understanding” that they’ve endured abuse. When she asked whether a girl who becomes pregnant after rape or incest could receive an abortion six months after conception, Glick said that would not be allowed under the current parameters of the bill.

Rumors circulated Monday that some members of the Senate Republican supermajority have threatened to leave the caucus — or already have — amid disagreements over the GOP approach to abortion-restricting legislation. That included speculation that longtime Republican Sen. Mike Young of Indianapolis has resigned from the Republican caucus.

When asked directly by the Indiana Capital Chronicle Monday morning whether he had resigned, Young said, “I don’t think I’m going to talk about this. If I ask you about your family fights, would you tell me about it?” he said.

Senate President Pro Tempore Rodric Bray only responded “no” when asked Monday by the Indiana Capital Chronicle if any lawmakers have resigned from the caucus.

“If their sole reason for the abortion is because of a rape, they knew there was a rape early on, and they knew that they were pregnant, much quicker than the late term abortion.” Glick said. “Being pro-life is not about criminalizing women. It’s about preserving the dignity of life and helping mothers bring happy and healthy babies into the world.”

Current Indiana law makes it a crime for a doctor to perform an illegal abortion and under the bill most abortions would be illegal. There are no criminal penalties for women who seek abortions in the bill.

Still, Glick said that could change as early as Tuesday.

“This bill is a framework,” Glick said. “One of the criticisms of our bill has been the lack of criminal penalties, and so I think you’re going to see amendments in regard. We’re here to listen to testimony and hear what those ideas and thoughts are.”

She told reporters late Monday that lawmakers “certainly aren’t going to agree 100%,” but emphasized that their goal is “to reach the right result.”

“If we can’t reach that result, there is a statute in Indiana we’ll live with until it will change in the future … we’ll come back in January and start again,” Glick said. “But we would hope to resolve as much as we can (now).”

Scores of people crammed into the Statehouse – and hundreds more took over sidewalks and streets outside — as public testimony began in the Senate chamber on Monday.

Katie Blair, advocacy and public policy director for the American Civil Liberties Union of Indiana, said Hoosiers showed up to fight against the elimination of “a crucial aspect of reproductive healthcare.”

“It is not up to the government to make these decisions for Hoosiers,” Blair said. “Forcing someone to carry a pregnancy against their will has life-altering consequences.”

Dr. Amy Caldwell, an OBGYN representing the American College of Obstetricians and Gynecologists, said her colleagues are “fearful to do their jobs,” noting that language in the bill is “unclear” and could put in jeopardy the licenses of medical professionals who perform abortions for any reason.

“Our goal is to reduce the number of abortions. The solution is not to ban them,” Blair said, emphasizing that the solution is access to “comprehensive contraception.”

“Abortion is common. It is safe,” she continued. “All of the proposed restrictions in Senate Bill 1 are unnecessary and harmful.”

Blair noted that people “with the least resources” will be the ones “forced” to continue their pregnancies.

Ariel Reem, who lives in Marion County, said her husband recommended she stop fertility treatments after the abortion bill was filed. Reem said the couple is worried about the consequences of the proposed ban, because she has a high-risk for miscarriage or stillbirth.

“I can’t tell you what that means to me when my husband says to me, ‘I’m scared to have a baby through IVF because I don’t know if you’ll live, and I don’t know if I can get you the care you need in time to survive it,’” Reem said, choking up.

“So when we read the language (of the bill) … it simply is just too vague. When is enough? When am I hemorrhaging enough to get care? What doctor is not going to be scared … to not lose their license to give me the care that I need?”

No support from anti-abortion activists

None of the anti-abortion proponents who testified at the Statehouse Monday were supportive of the Republican proposal.

“According to you, I shouldn’t be here, right? According to you, I should have been aborted, right? Because a child that would have had to go through foster care is better off dead,” said Marissa Jensen, a 17-year-old in foster care. Her adoptive mom, Kerrie, also spoke against the bill in its current state, arguing that it still leaves open too many options for abortion.

“This shouldn’t still be up for debate,” Marissa said. “Stop killing us.”

Seth Leeman, a pastor in Noblesville, said he and other members of the state’s Christian community expect lawmakers to “abolish abortion Indiana without exceptions.”

“If the language of this bill isn’t changed, innocent children will die,” he said. “God’s wrath will continue to be stored up against us, and the Republican party will lose many of its God-fearing constituents.”

Those seeking a full abortion ban additionally argued that without enough penalties for abortion providers – or requirements for prosecutors to act – the bill lacks any enforcement.

“The AG opposes this bill, as written, because it falls short of vigorously protecting life,” Youngs said. “There are a number of substantive and technical issues with this bill.”

The Republican attorney general’s office seeks clarity on the fetal medical conditions that qualify for an abortion, Youngs said. Similar details are needed to determine when endangerment to the woman allows her to terminate the pregnancy.

Further, Youngs said the bill doesn’t provide evidence or accountability in cases of rape and incest.

“There is no justice for the woman. Only the perpetrator and the abortion industry will benefit. There is no accountability for the criminal,” she said, adding that the attorney general will defend the legislation “regardless” of what is passed.