United States Attorney General William Barr was in Indianapolis on Thursday to get an update from federal and local law enforcement officials on Operation  Legend, an anti-gun crime, and violence program.

U. S. Attorney Josh Minkler says since its start this summer, Operation Legend has netted 88 arrests, 216 guns, more than a kilogram of heroin and fentanyl each, 27 kilograms of meth, and more than $1.5 million in drug money.

You can hear Barr and Minkler, as well as IMPD Chief Randal Taylor in the Leon-Tailored Audio above.

It runs for about 16 minutes. 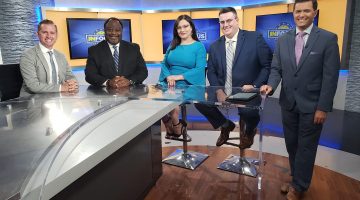