Trump spoke at a high dollar fundraising event at the Columbia Club in downtown Indianapolis as well as a rally for the general public in Westfield.

He spoke highly of Pence, but did not announce that he would pick the Governor as his running mate.

You can hear Trump’s speech in the Leon-Tailored audio below as well as reaction from Senate President Pro Tempore David Long and State Auditor Suzanne Crouch who attended the private event, as well as Indiana Democrat organizer JD Ford.

Trump was introduced by Governor Pence.

A decision is expected by the end of the week.  If Trump were to pick Pence, the Governor would have to withdraw from the ballot by Friday under state law. 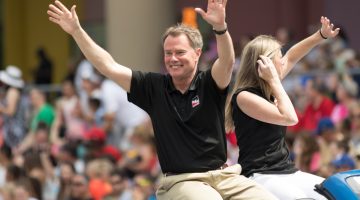