Here are a few political news items from across the state that might be worth a mention or two.

Although Indiana lawmakers won’t get the revenue forecast for at least a week, current figures show state tax collections relatively flat, but still up over last year.   To date, Indiana has taken in more than $10.5 billion, that’s nearly $400 million over last year, but only 0.6 percent since July. Individual tax collections were down 1.7 percent since the start of the fiscal year, but corporate income taxes were up nearly 11 percent. Racino and gaming revenue averaged an increase of 2.7 percent.

There’s some possible good news for the Indiana Toll Authority.  A U.S. District Judge has dismissed a lawsuit by the Owner-Operator Independent Drivers Association (OOIDA) against the operators of Pennsylvania Turnpike over an increase in tolls to help pay for mass transit.  According to the Pittsburgh Post Gazette,  Judge Yvette Kane found against the truckers’ claim that using turnpike tolls for transit and other non-turnpike expenses violated the federal dormant commerce clause, which they say means tolls can only be used for turnpike expenses.   The OOIDA filed a similar suit against the state of  Indiana back in January.

Indiana Commissioner for Higher Education Teresa Lubbers will give the seventh-annual State of Higher Education Address at 4 p.m. on Monday, April 8 at the Indiana Statehouse. This year’s address will highlight how Indiana is supporting the transition from high school to college and careers.

State health officials have confirmed a case of measles in northern Indiana. The Indiana State Department of Health (ISDH) is working with local health departments and healthcare providers in LaGrange and Steuben counties to identify anyone who may have been exposed to the patient while infectious and to prevent further transmission of the disease.  ISDH is also consulting with public health officials in Michigan and Texas because the investigation has found risk of exposure in those states as well.

South Bend Mayor Pete Buttigieg will appear this Sunday on Meet the Press. 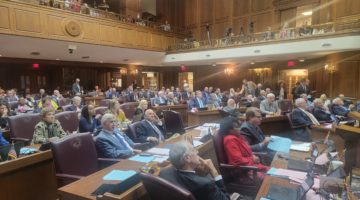