A measure that would have expanded cold beer sales in Indiana was defeated 9-1 by a Senate panel, but proponents say they’ll be back next year.

The Senate Public Policy Committee turned down a measure that would have allowed convenience and grocery stores the opportunity to sell cold beer.  Currently, only liquor stores can sell cold beer.

Proponents, like Jay Ricker of Rickers convenience stores, say it was about giving consumers choice, however, opponents cited public safety and the dangers of alcohol.

You can hear Ricker in the Leon-Tailored audio above, it runs about nine minutes.

“The Indiana Association of Beverage Retailers applaud the Senate Public Policy Committee for rightly rejecting the misguided expansion of the sale of cold beer for carry-out.   Now that this poor public policy has been soundly rejected by the Alcohol Code Revision Commission and by the Indiana State Legislature after months of hearings and testimony, we consider this issue settled.”

Ricker and other cold beer carry out proponents say they plan to come back next year. 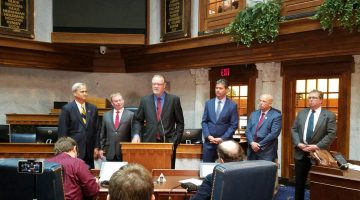