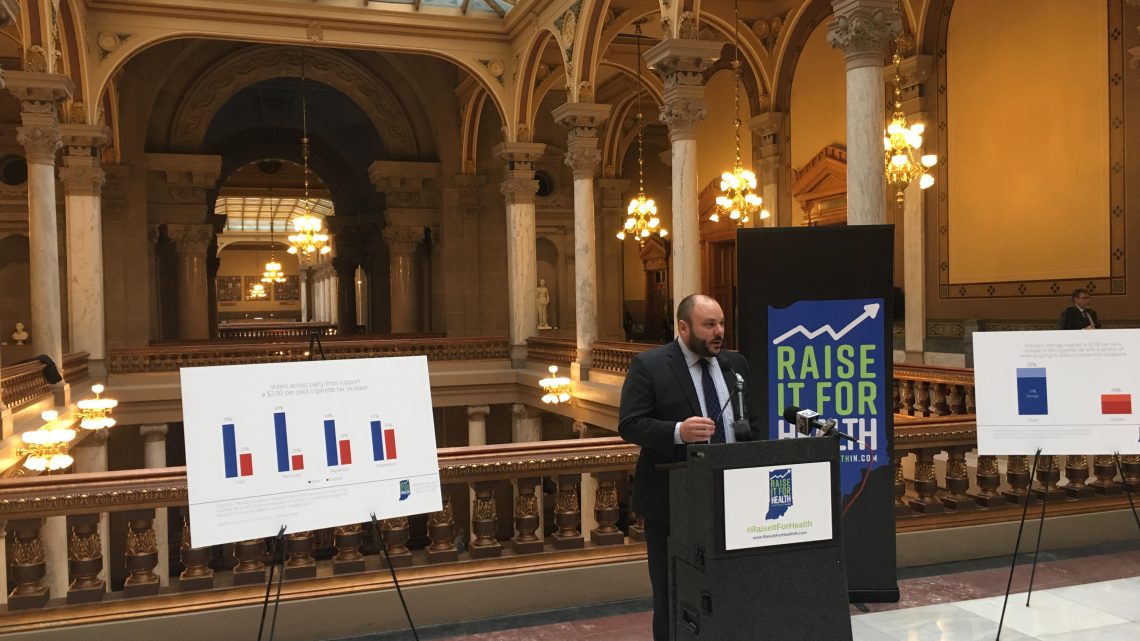 Supporters of a $2 per pack increase in the state cigarette tax say they are not alone.

Raise It for Health pointed to a new poll shows Indiana voters of all party and political affiliations strongly support raising the state’s cigarette tax by $2.00 a pack as a solution to improve Indiana’s critically poor public health rankings, save Hoosier lives, and develop a strong workforce.

The poll of 600 registered voters showed 70 percent of them overall support the $2 increase with some revenue being dedicated to tobacco prevention programs to keep kids from using tobacco and help smokers quit. The poll also finds that two-thirds of voters are more likely to support a state legislator who supports a tobacco tax increase.

Nearly eight-in-10 (78 percent) of voters said they would be more likely to support a state legislator who says that “Indiana has to be willing to spend money to improve its poor public health rating; it’s not enough to be a top ten business state, Indiana needs to strive to be a top 10 healthy state.” Indiana is behind the curve on public health. Since Indiana last increased its cigarette tax in July 2007, 35 states and DC have increased their cigarette tax rates 70 times.

“As Indiana legislators address the state’s potential budget deficit and aim to improve the state’s competitiveness, these poll findings show that voters have a rather clear message for them: raise the state’s cigarette tax significantly,” said Christine Matthews, President of Bellwether Research & Consulting, which conducted the polling. “A $2.00-per-pack increase will help the state combat the budget challenges, improve the state’s workforce, make Hoosiers healthier, and improve the state’s standing compared with other states.”

When asked about potential ways the legislature could address the state’s potential revenue gap – including a gaming income tax increase, a toll road fee increase on all vehicles, and a sales tax on services – the results were strikingly clear. Voters strongly supported only one: increasing the state’s cigarette tax.

Advocates also point to experts’ estimates that a $2.00 increase in the state’s cigarette tax would generate more than $2.6 billion in long-term health care cost savings and over $350 million in new revenue in the first year alone. Such an increase would also help 70,000 adults quit smoking, prevent 14,000 smoking-affected pregnancies, stop 12,000 youth under 18 from ever becoming smokers, and would prevent 58,000 children now under 18 from becoming lifelong adult smokers.

Other key findings from the poll include:

The poll, conducted by Bellwether Research and Consulting and paid for by the Campaign for Tobacco-Free Kids, was conducted Dec. 9-12, 2018, of 600 registered Indiana voters with a margin of error of +/- 4%.

Statehouse News You Can Use