The head of the Indiana Apartment Association says an Indianapolis ordinance that would have given tenants more rights, particularly in retaliatory eviction cases,  would have had the consequence of harming a landlord’s rights to due process.

This week the Council approved an ordinance that would give tenants more rights, however, Indiana lawmakers are moving forward with legislation that limits a local government’s ability to regulate landlord-tenant relations.

Lynne Petersen of the Indiana Apartment Association tells Indy Politics that under the city ordinance, the burden of proof would be on the landlord in a retaliatory eviction case to prove it n had nothing to do with a tenant exercising their lawful rights when complaining about apartment conditions, as opposed to the individual making the claim.

In addition, she adds the under the city code any fines collected against the landlord would go to the city, under the state proposal she says they go to the tenant.

You can hear Peterson in the Leon-Tailored Audio above.

It runs for about ten minutes. 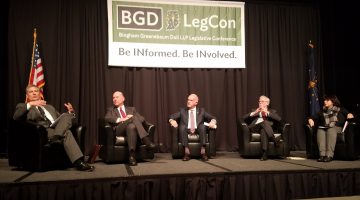