Donald Trump’s Republican Presidential campaign is officially setting up shop in Indiana and tapping a former State Party Chairman to head up the efforts.

In a news conference this morning, former State GOP Chairman Rex Early announced he would head up the campaign as State Chairman.  Tony Samuels, former communications director for House Speaker Brian Bosma will be Vice-Chair.  And as first reported in this past weekend’s edition of the Cheat Sheet, Suzanne Jawoworski will oversee the day to day campaign operations.

Early says despite the loss in Wisconsin, he thinks Trump will be able to compete in Indiana.  And Samuels says Trump will be in much friendlier territory in the upcoming states between now and the May primary.

You can hear their comments in the Leon-Tailored audio above.  It is divided into two parts.  Part one is the announcement.  Part two is questions from the media.

A quick note, although the Trump announcement was at the State GOP headquarters, the party does not endorse any presidential candidate during the primary, it simply makes space available for them to talk with the media. 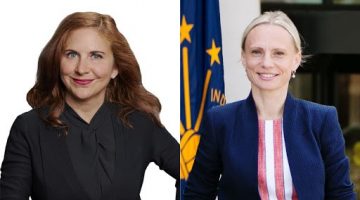