Indiana Congressman André Carson joined 195 other Members of Congress this week in filing a lawsuit in the Federal District Court for the District of Columbia against President Donald Trump alleging he violated the Constitution’s Foreign Emoluments Clause.

The Emoluments Clause states that the president must seek the consent of Congress before accepting any gift from a foreign government.  The lawsuit states that President Trump has violated the Constitution on several occasions by profiting from the Trump Organization’s business dealings with foreign governments and state-owned organizations.

Carson and other lawmakers argue that through these business transactions, the president has failed to obtain Congressional consent to allow these foreign dealings.

“When our Founders drafted the Constitution, they entrusted Congress with the responsibility of ensuring that presidents act in the interest of the nation rather than personal financial interests,” Congressman Carson said. “In filing this lawsuit, we are working to safeguard this Congressional responsibility.”

This suit builds on two other lawsuits against President Trump by private businesses and the Attorney Generals of Maryland and the District of Columbia. 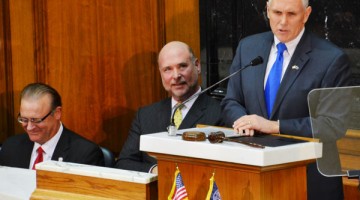