“I am running for Attorney General because Hoosiers deserve a tested and proven prosecutor who will be tough on crime, support law enforcement, protect victims and defend our conservative core values in words and deeds,” said Harter. “As a committed grassroots conservative, I know that in these perilous times, the Attorney General has a crucial role as the tip of the spear – or the last line of defense against big government and the radical left.”

Harter says as County prosecutor he developed a reputation as a tough and effective litigator, nearly doubling the office’s workload since 2014 while winning nearly 90 percent of jury trials and instituting new policies to protect vulnerable victims.

While announcing his campaign, Harter said it was urgent to protect the position.  You can hear his comments in the Leon-Tailored audio above.  They run for about 10 minutes.

“There is simply too much at stake to risk losing the position to a liberal Democrat who will be well-positioned to undermine the agenda of our friends in the legislature and in the executive branch,”  Harter added.  “We cannot let that happen.”

Incumbent Attorney General is running for re-election,  even though the Indiana Supreme Court has yet to decide whether he will be able to keep his law license.  Also running for the spot is  Indianapolis-area attorney John Westercamp.   Former Department of Revenue Commissioner Adam Krupp announced Tuesday he was withdrawing from the race and putting his support behind Harter.

To win the Republican nomination for Attorney General,  a candidate must be elected by a majority of the delegates to the Indiana Republican State Convention, scheduled for June 20, 2020 in Indianapolis, Indiana.   It is unclear however whether the convention will take place due to COVID-19.  Party officials are currently exploring alternatives to an in-person convention. 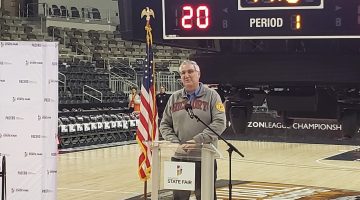 A Few Minutes with Eric Holcomb