The Mayor announced that Indianapolis will spend an additional $150 million over the next three years in American Recovery Act funds on public safety.

The goal is to hire 100 new police officers, have 50 “peacekeepers” on staff, and fund crime prevention programs to the tune of $15 million annually.

Indianapolis is experiencing another year of record homicides.

In non-public safety areas, the city is spending an additional $50 million on stormwater and road repair, $17 million on deferred maintenance in Indy’s parks, $60 million on affordable housing, and $22 million to help small businesses and workforce development.

Reaction was mixed along party lines.

“We thank the mayor for presenting a budget proposal that highlights the critical needs of our community,” said Democrat Maggie Lewis.  “During these most uncertain times with the effects of Covid-19 still affecting many of our residents, we must all remain steadfast in our efforts to ensure the proposed budget will achieve the mayor’s goals of enhancing our neighborhoods, strengthening services provided by city-county government agencies and placing our city on a pathway towards economic recovery.Additionally, maintaining our goal to keep our spending down will ensure that the commitment of no tax increases for those who live and work in our city will be achieved.”

“As usual, there has been limited communication from the Hogsett Administration to the Republican caucus about the mayor’s budget before the public presentation tonight. However, our goal in the coming weeks is to help craft a bipartisan budget that responsibly prioritizes public safety, economic development, infrastructure, and public health,” noted Council Republicans in a statement. “It is our hope to make sure the city’s budget priorities are not simply throwing more money at many of the failed policies from the last several years. As Indianapolis faces crises from public safety, to infrastructure, to businesses leaving downtown, we hope to help craft a budget that we can all support and meets the needs of the moment.”

The budget proposal will now go to the City-County Council for approval.

You can hear the Mayor, City Controller, Police Chief, Head of the Office of Public Health and Safety, as well as the Deputy Mayor of Community Development in the Leon-Tailored Audio above. 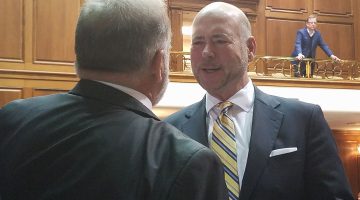