State officials are taking a measured response to a national report that shows positive news for Indiana’s efforts to combat COVID-19, the coronavirus.

Last week the University of Washington’s  Institute for Health and Metrics and Evaluation (IMHE) stated Indiana’s COVID-19 cases would peak on April 14, the state was short an estimated 2,000 hospital beds and it would likely see 2,400 deaths by August 4.

On Monday, the IHME reported the state would peak on April 17, but it had a surplus of 5,000 hospital beds, 706 of those were for intensive care patients and would see 940 deaths by August 4.  In addition, the number of ventilators the state would need was 402. Last week it was 854.

In an afternoon virtual media briefing, Holcomb administration officials said while they believe their efforts are working, they don’t want to rely on one data point and they are preparing for both the best and worse case scenarios.

Right now officials are preparing for an expected mid-April surge of COVID-19 cases and taking several steps to address them such as making more hospital beds and staff available as well as asking the federal government for a disaster declaration.

You can hear Governor Holcomb, as well as other members of the administration in the Leon-Tailored audio above.  Each segment runs for about 25 minutes. 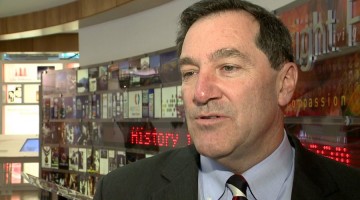