An attorney suing Marion County over civil forfeiture says proposed changes in state law are a step in the right direction in stopping local governments from abusing their authority.

Indiana lawmakers are moving forward  SB 8  which overhauls the state’s civil forfeiture laws.  Currently, Hoosiers do not have to be either charge or convicted of a crime for the government to take their property through civil forfeiture.

Under the bill, the government would first need to secure a criminal conviction before forfeiture could occur. SB 8 would also shift the burden of proof from innocent third-party owners onto the government—where it belongs—and require “clear and convincing evidence” to forfeit property.

Indy Politics spoke with Sam Gedge of the Institute for Justice about the legislation.  Gedge says the law protects Hoosiers’ property rights while still allowing law enforcement to use civil forfeiture to reimburse themselves for the costs of criminal investigations.

If SB 8 is passed into law,  Indiana would join a growing, nationwide reform movement. In the past two years alone, 19 states and the District of Columbia have reformed their forfeiture laws. Twelve states currently require convictions for most or all forfeiture cases. And the national party platforms of both the Democrats and the Republicans endorsed forfeiture reform last year. 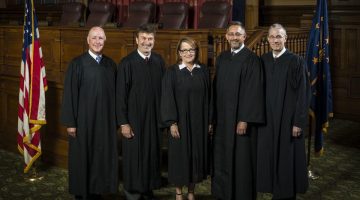