The public advocacy group Common Cause is offering lawmakers ideas on how to revamp the way legislative maps are drawn and it’s getting mixed reaction.

A special Redistricting panel was created last session to look at how lawmakers create maps.

Common Cause  is recommending a nine-member panel draw maps every 10 years. It would consist of three Republicans, Democrats, and three non-affiliated members. Hoosiers could apply on-line and the top 30 would be picked and a lottery would be used for the finalists. Common Cause also says no lawmaker who served in office in the past 10 years could serve on the panel.

Any maps that would be drawn would have to comply with the Voting Rights act, could split up communities of interest and be drawn to encourage competition, while being geographically compact. Lawmakers could make adjustments to the final maps, but it could not impact more than two-percent of the population.

Indiana lawmakers who served on the Redistricting panel seemed somewhat skeptical of the proposal. Republican Senator Brandt Hershman of West Lafayette said proponents haven’t really identified what the problem actually is. However, Democratic State Representative Justin Moed noted the public should have more say in the process.

You can hear from both lawmakers, as well as Common Cause Director Julia Vaughn, in the Leon-Tailored Audio above. 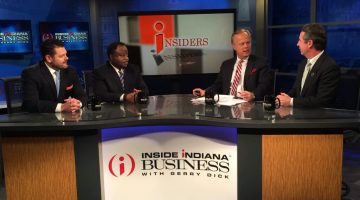