The Superintendent of Indianapolis Public Schools says the district is learning quite a bit from the public as it decides which high schools it will have to close due to declining student population.

IPS only has about a fifth of the population it had 20 years ago, so the district is looking at restructuring, which means closing three high schools.

It’s held two public meetings on school closings and Superintendent Lewis Ferebee says the public has offered some thoughts the district hadn’t taken into consideration such as converting the underused high schools into senior citizen housing or re-entry facilities.  Some members of the public suggested closing the high schools over a staggered period as opposed to all at once.

Indy Politics spoke with Dr. Ferebee.  You can hear him in the Leon-Tailored Audio above.  It runs about 8 minutes.

IPS says by closing three high schools it can save about $4 million annually and reinvest those dollars into existing programs.

Next post Indiana Chamber: 2017 an A- Session for the Business Community 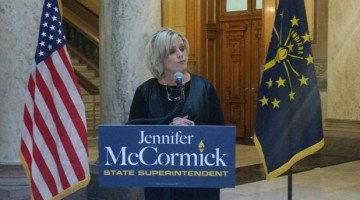