Here are a few news items you might find interesting…

As first reported in the Cheat Sheet and confirmed Wednesday by the Indianapolis Star, 9th District Congressman Trey Hollingsworth is not running for re-election.  (Indy Politics)

A House committee has advanced a bill pushing back on critical race theory, after some changes aimed at defusing a national uproar over comments in a Senate hearing.  (WIBC)

The Indiana Senate’s version of legislation to enact administrative tools to end the state’s public health emergency passed in committee unanimously on Wednesday, with backing from business and health care leaders  (IBJ)

Legislation providing oversight for township trustees passed out of a House committee Wednesday on a unanimous vote.  (WFIU)

School board members from across Indiana voiced opposition Tuesday to a Republican-backed proposal that would add political party identifications to what are now nonpartisan school board elections throughout the state.  (AP Indiana)

GET THE NEWS DELIVERED TO YOUR E-MAIL DAILY.

More Hoosiers currently are hospitalized with COVID-19 than at any time in the 22-month history of the coronavirus pandemic in Indiana.  (Times of Northwest Indiana)

Indiana Chief Justice Loretta Rush provided an update Wednesday on the Indiana court system in her State of the Judiciary address, her eighth to date. (The Statehouse File)

A class-action lawsuit filed this week accuses more than a dozen of the nation’s most prestigious universities — including the University of Notre Dame —  of colluding to limit the amount of financial aid given to students and favoring wealthy applicants in the admissions process.  (South Bend Tribune)

The City of Indianapolis has responded with silence to a request by two FedEx shooting victims and a victim’s family member for millions of dollars in compensation, which significantly narrows their chances of a payout.  (Indy Star)

Purdue University and Indiana University are teaming up in an effort to boost the state’s talent pipeline by keeping more graduates in Indiana.   (Inside Indiana Business) 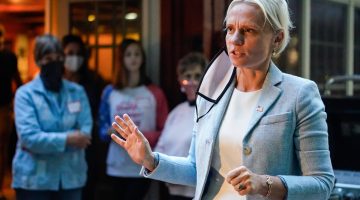