The young man who says Indy City-Council President Stephen Clay sexually molested him as a teenager says he is willing to come back to Indianapolis and tell his story to any Council ethics committee, if necessary.

The Council was scheduled to vote Monday on whether it would retain Clay as President. However, Clay had the measure removed from the agenda and replaced it with a proposal that would forward it to the Council’s ethics committee.

LET US KNOW WHAT YOU THINK ABOUT INDIANA POLITICS, TAKE OUR INDY POLITICS POLL.  CLICK HERE

Last month, Indy Politics broke the story featuring allegations by Jonathan Bryant that Clay had sexually groped him when he was a minor. Those allegations were substantiated by a DCS report. Clay, however, has denied them and RTV 6 reported that there was no record of law enforcement following up on the state findings.

Bryant tells Indy Politics he has been following the entire controversy from his home in Georgia. He describes Clay’s behavior as “narcissistic” and showed a lapse in ethical judgment, and if his presence were requested he would tell them about what Clay allegedly did to him, and Bryant says he remembers more details than what was in the original report.

The Council is scheduled to meet Monday at 7 p.m. 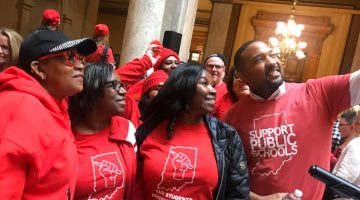