Senate President Pro Tempore David Long says if lawmakers want to take another shot next session at adding civil rights protections for the LGBT community into state law,  they should start in the House.

Long made those comments today during a post sine die media briefing.   A measure to add sexual orientation and gender identity to the state’s civil rights code never made it out of the Senate chamber.

House Democratic Leader Scott Pelath agrees with Long, saying the House should take up the measure.  Pelath also says there is Republican support for such a measure and that it was time for the law to catch up with society.

You can hear both Long and Pelath in the Leon-Tailored Audio above.  They also discuss other measures that were addressed this session such as roads, education and pseudoephedrine. 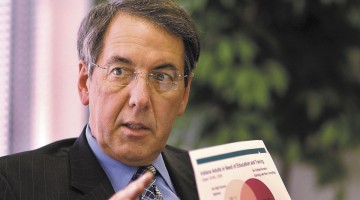