Although it’s the political equivalent of winning a pre-season fantasy football game, more than 350 Republican activists gathered in Indianapolis to give Congressman Luke Messer a victory in the party’s first straw poll.

Todd Rokita was second with 82 votes, and former State Representative and businessman Mike Braun got 36 votes.

The event was not without controversy. The Indianapolis Star reported complaints by the Todd Rokita U.S. Senate campaign that the poll was rigged because the Messer campaign paid for a group of college students to participate.

State Chairman Kyle Hupfer dismissed the criticism, saying it was more important to focus on defeating Democrat Joe Donnelly in the fall.

You can hear Messer, Rokita, and Braun all in the Leon-Tailored Audio above.  Their interviews run about 10 minutes altogether. 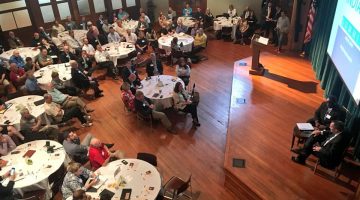